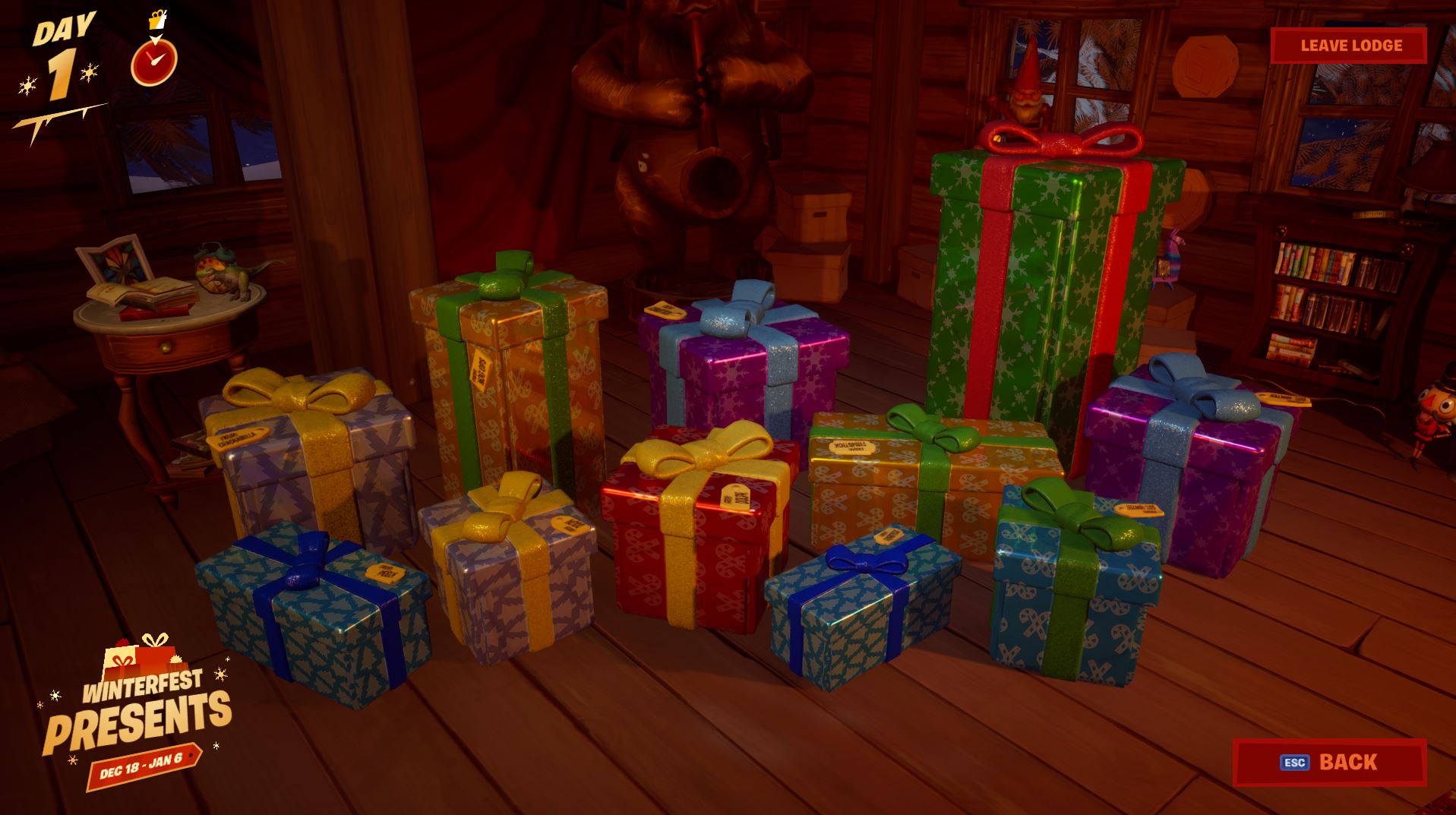 Here’s a list of all the free Fortnite Christmas Winterfest presents players can receive from the cabin.

Epic Games updated the in-game news feed a few days ago to announce that Fortnite Winterfest would be released on December 17th. However, the Christmas event was delayed although Epic didn’t officially acknowledge that it had been delayed.

The v11.31 was announced yesterday, and the Fortnite Winterfest Christmas event had some updated files. A few hours after the update, Winterfest went live. There are some similarities with last years Christmas event, 14 days of Fortnite, as well as brand new features.

A new weapon or item will be unvaulted for 24 hours each day, and a returning LTM will be added to the playlist. There’s also a bunch of Winterfest challenges and rewards with one unlocking each day.

The new feature this year is the Winterfest Cabin. Players can login each day and visit the cabin to unlock a free daily Christmas Winterfest present. You’re able to look around the cabin and select the present you want to open. Players can shake the Fortnite presents beforehand in order to get an idea of what it could be in it.

Players have begun opening their presents and posting what they’ve opened. According to Epic Games, the Fortnite presents include two skins/outfits, two gliders, two pickaxes, two wraps, one emote and more. Here’s a list of what’s in all the Fortnite presents that we’re aware of as of day 1 of Winterfest.

GUIDE: Here’s a cheat sheet guide for which Fortnite presents to open.

These rewards are separate to the rewards obtained by completing the daily Fortnite Winterfest 2019 challenges. Most of the Fortnite presents can be selected on day one and opened, however, there’s a couple that can’t be opened yet, which likely contain the free skins.

Here’s the list of all the skins, pickaxes, gliders, wraps, emote, contrails and other items which can be obtained from Fortnite presents:

This is one of the larger Fortnite presents which cannot be opened yet. The skin is still encrypted, but was leaked by dataminers in-game.

Another present reward that likely cannot be opened until the final couple of days of Winterfest.

“There’s always something special under the tree”.

“Fastest hunk of junk in the galaxy”.

“Tap a deep vein of mintiness”.

“A Winter Wonderland in your hand”.

The Sith Back Bling

“Force-wielders devoted to the dark side”.

The only other Fortnite present reward that appears to be missing is the Merry Beastmas loading screen. It’s a loading screen, so it’s not exactly the best reward you can get from these presents.

Let us know in the comments section below which cosmetic you’ve received from your first present.