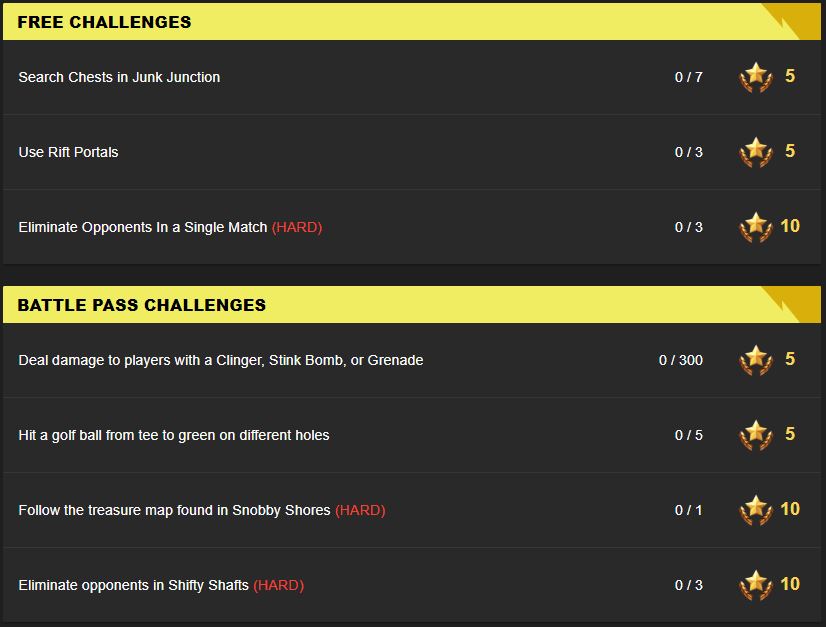 The free pass challenges are pretty self explanatory and we will be releasing a map to show the possible spawns for treasures chests in Junk Junction on Thursday and we already have a map for the known locations of the Rift Portals.

Dealing damage to opponents means that you do not have to eliminate them entirely to receive point, you simply have to inflict some damage on your opponents.

In this season, we were introduced to a new feature in Fortnite, which was having toys that are interactable by players. These toys are unlocked at different tiers in the Battle Pass and it looks like this week incorporates the golf ball, which is unlocked at tier 27. We will be releasing a map with all golf courses shortly after the challenges go live on Thursday to help you complete this challenge.

‘Follow the treasure map..’ challenges are very common and are regularly seen in the weekly Fortnite challenges. We will be releasing the location of the Battle Star on the Fortnite map, along with a video to show you the exact location when challenges go live on Thursday.

We will be releasing tips and a map of locations where necessary to help you complete all the challenges for Season 5, Week 5 as the location of the hidden Battle Star found in the Road Trip loading screen #5.