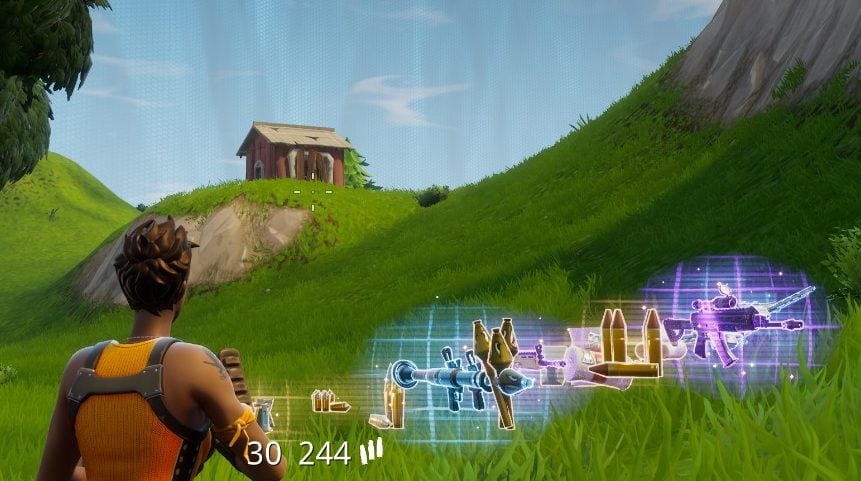 Fortnite is a very fast paced game and players need to be able to loot quickly to avoid being killed. However, there have been many times when looting enemies that have been killed has resulted in the loot being clumped together, making it harder to pick up items you actually want. There are also times when players want to be only pick up enough stackable to fill one inventory slot but end up swapping their weapon they currently have equipped when looting if there are more than the max per inventory slot on the floor. Even though this last issue can be resolved by equipping the Harvesting Tool and then looting to ensure only one inventory slot gets maxed if the item is already in the players inventory, Reddit user Sora26 has thought of a concept that will help players to loot quicker:

As mentioned in the post, players would automatically pick up weapons that were of higher rarity, but only if the same gun with a higher rarity was on the floor. There would be no reason for a player to not want a better rarity in the exact same weapon and this will definitely speed up loot and avoid picking up items by mistake.

Items such as Bandages, Med Kits, Grenades, etc. can be stacked in higher quantities that the quantities they are found in. If players were to pick up and item, of course they would want to max out the quantity they could hold and so having this feature would speed up the looting process and avoid picking up extra and dropping an item by accident.
As previously mentioned, It could be argued that equipping the Harvesting Tool before picking up these stackable items is the way to avoid these issues and so the auto pickup for these types of items may be unnecessary.

This could be a toggleable feature where players are able to choose if they want this or not by turning it on/off in the settings.

What do you guys think of this concept? Does it take away from what a Battle Royale game is meant to be or do you think this is needed? Let us know your thoughts in the comments section below.

I believe it takes away the concept. Decisions must be made and every player has to manage that decision making and blend it to their playing. Adding this feature only reduces the learning curve and would just ruin the intensity of the player with this feature

Great idea, i’d like to see this feature in the future.

They already have “auto pickup items”… it’s a new option under the settings… it’s extremely useful, but can be annoying if you have empty slots. You’ll pick up whatever you run over & it does automatically pick up heals, grenades, etc and stack them if you already have them in your inventory… but the other concept is a cool concept.

The auto-upgrading of weapons is a cool idea but the major drawback to it I can see is the potential to interupt combat. If you accidently “upgrade” your weapon mid-fight and say you go from a fully loaded purple scar to a gold scar with an empty clip, that could be the difference between life and death mid-fight. Good idea,, but I’d leave it turned off just in case the scenario I mentioned happened. Upgrading of weapons is a very minor thing in the game for me, smooth combat is a major thing.

What about running over a higher rarity item that doesn’t have any ammo in the magazine during a fight. This mechanic will never work right and should not be implemented. Stop catering to make the game easier for noobs.

I agree with olly and mista,
At the end of the day this game is challenging in a way because you have to make decisions and pick up items as you go its part of the combat and the game, all this will do is make the people who cant grasp the concept of upgrading correctly survive slightly longer.

Gone are the days of games staying challenging and requiring thought lets just make it auto win for everyone and ruin yet another game.

© Copyright © Fortnite Insider 2018. Portions of the materials used are trademarks and/or copyrighted works of Epic Games, Inc. All rights reserved by Epic. This material is not official and is not endorsed by Epic.
wpDiscuz
7
0
Would love your thoughts, please comment.x
()
x
| Reply