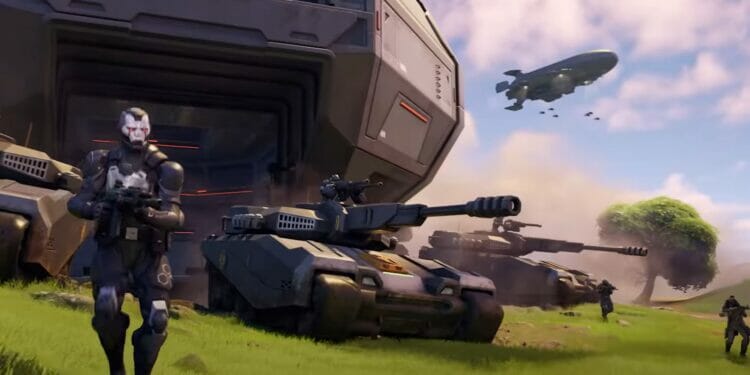 Here are the driveable vehicles we will have in Fortnite Chapter 3, Season 2.

Epic Games have done a good job of keeping this season tight-lipped as there haven’t been any teasers and for the most part, no leaks apart from the Doctor Strange Skin leak. Players have been left wondering if the season would be extended instead of it being released today on the 20th March 2022 as no teasers were released in the lead-up to the game, but the @FortniteStatus Twitter account did announce the downtime for the new season.

At the time of writing, the downtime for the v20.00 is underway but Epic Games have revealed the trailer for the new season, which is called Resistance and is a 1 minute 28 seconds video called the Resistance story trailer. You can read more about that by clicking here. This article goes through the vehicles we will likely be having in the new season, based on this trailer.

There are many vehicles we have been spotted in the Fortnite Resistance trailer and one of the more exciting ones that has been leaked to be in the files in the past is the tanks. Tanks can be seen near the start of the trailer and it looks like it can hold at least two players, one driving instead and one on the turret at the top.

Another new exciting vehicle we can see in the trailer is Battle Busses, which appear to have some armor on them. If you look at the front of the bus, there is a blade similar to the ones seen on bulldozers, that easily broke through the fence. There is also a turret placed at the top of the bus for a passenger to manoeuvre.

Due to this, there will be at least two people that can use this vehicle at a time, the driver and the passenger on the turret, but if you look behind the character on the turret, there is another person on top so we will have to wait and see how many players can in fact board the bus.

During the trailer, you also see planes being used, which means that it is possible planes will be making a return to the game. In the past, we have had the X-4 Stormwing Planes where passengers on the plane can shoot the turret on the plane whilst another player drives. IT could also just be a helicopters that will be coming to Fortnite Battle Royale.

There wasn’t much emphasis on this in the trailer where we see a character driving one, but you can see in the background, so there is a possibility there will be some sort of plane coming back to the game.

In the trailer, you can see zeppelins in the sky and it is possible we could potentially be able to drive the vehicle but there are some Season 2 map leaks that suggest they could act like the Mothership from previous seasons. You can read more about the Season 2 map by clicking here.