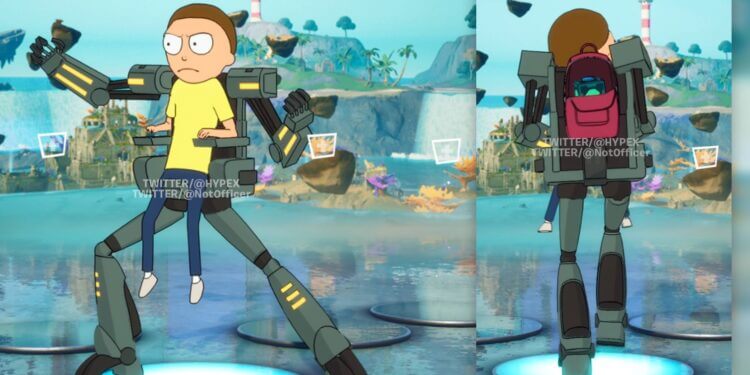 Two new Fortnite Skins that were added in the v17.40 update have been leaked, which are the Morty and Janky Skins. Here is what they look like in-game.

In the v17.30 Fortnite update that took place earlier today, there were quite a few new Skins that were added to the files and leaked by dataminers, which we covered in an article you can see by clicking here. As with most updates in which Epic add new files, there are always some Skins and other cosmetics that are encrypted to try and stop dataminers from leaking them before they have been officially announced by Epic.

In the past there have been some instances where these Skins are leaked anyway, although it can take dataminers some time to do this. It looks like there were many files that were encrypted in today’s update, but leakers @HYPEX and @NotOfficer on Twitter were able to leak the Skins and Back Blings of four different sets. The first two were of Will Smith and a potential Crew Pack Skin, which you can see by clicking here. The other two Skins are for Morty and Janky, both of which you can see below.

As Rick Sanchez was added to this seasons Battle Pass, it comes at no surprise that there would be a Morty Skin being released this season, and sure enough, this Skin has now been leaked by dataminers and you can see what it looks like below:

You can unlock Rick Sanchez on the last page of the Battle Pass (Page 10) and you can purchase him for 10 Battle Stars, providing you have unlocked all other cosmetics on the same page. It is not yet known how much this Skin will cost or when it will be released in the Fortnite Item Shop, but we will keep you updated with the latest. There also appears to be an emote called Get Schwifty in the Rick & Morty set, which you can see in the video below:

UPCOMING Rick & Morty "Get Schwifty" EMOTE! (Thanks to @Not0fficer for the help again!)

This emote can be done alone & in a group! pic.twitter.com/n4u6N9q6N2

Guggimon is another collaboration Skin that can be found in this seasons Battle Pass and he is an animated / virtual influencer online created by Super Plastic. If you know about Guggimon, then you must of heard about Janky, and it looks like he will be coming to Fortnite soon as the Janky Skin has also been found in the files and leaked by dataminers. You can see what it looks like below:

You can purchase the Guggimon Skin at Page 4 of the Battle Pass for 9 Battle Stars, providing you have purchased all other cosmetics on the page. Again, there is currently no information as to when Janky will be released in the Item Shop and the price of it as yet, but we will keep you updated.