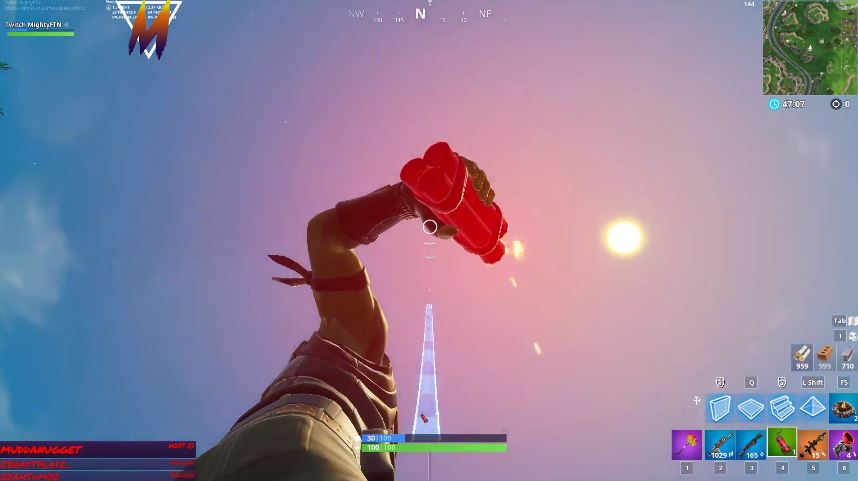 A new item was added into Fortnite Battle Royale yesterday, Dynamite. Within an hour of its release, it was disabled due to the item causing client crashes. It was later added back into the game and Reddit user TheMightyWitcher has found a game breaking glitch with this item.

When holding the dynamite, this player was able to avoid any damage from the explosion, simply by looking up in the air. This did however, break the structure around the player, which means in a situation where an opponent has either outbuilt them or has turtled up in a 1×1, players can use this glitch to break their structure and gain an advantage.

Want to break into someone’s 1×1 with dynamite and take 0 damage? Just look up lol from r/FortniteCompetitive

Epic have not commented on this glitch yet, but it’s likely once they are made aware of this glitch, the item will be temporarily disabled until a fix is found. It’s also possible however, that Epic keep the item in the game and implement a hotfix when a solution has been found as a leak suggests that one of the week 9 challenges will include a challenge where a player needs to deal 10,000 damage to opponent structures. Altneratively, Epic could replace this challenge if they can’t find a solution before the week 9 challenges are unlocked at 1pm UTC tomorrow.

Epic have a history of adding items into the game and having to change or remove them quickly due to the issues/glitches that have come with their introduction. Last week, in the v6.30 patch update, the Mounted Turret was added into the game and was nerfed in a hotfix due to players complaining about how overpowered the new legendary trap item was. Epic also adjusted the availability of the item in the default modes and yesterday introduced a hotfix that made the Turret overheat a little faster as well as reducing the headshot multiplier. More changes will be made to the item in the v6.31 update.